6PAK Nutrition BETA PAK is a great pre-workout formula on the basis of beta-alanine with the addition of vitamin B6, it helps to maintain normal metabolism of proteins and glycogen and normal energy metabolism during exercise at high intensity.

High-quality beta-alanine in the form of powder. It is characterized by high purity and lack of unnecessary additives and fillers! It affects the increase in exercise capacity of the whole body – which allows you to run longer and more intense workouts!

6PAK Nutrition BETA PAK is a great pre-workout formula on the basis of beta-alanine with the addition of vitamin B6, it helps to maintain normal metabolism of proteins and glycogen and normal energy metabolism during exercise at high intensity.

6PAK Nutrition BETA PAK is a proposal for athletes virtually all sports (from the typical strength, strength-endurance after typical endurance). The relatively simple composition including beta-alanine and vitamin B6, is its potency. The maximum concentration allows you to run specific dose supplementation with proven effect.

UPS exercise performance AND SUPPORTS FOR PROPER POWER CONVERSION WITH ADEQUATE DOSE OF VITAMIN B6.

6PAK Nutrition BETA PAK allows you to strengthen the muscles after a few doses. Many athletes believe that beta-alanine has been running for the first dose, but shows its potential only after about a week of use. It affects an increase stocks carnosine primarily found in skeletal muscle. Carnosine is a di-peptide, whose structure is the molecule of beta-alanine and histidine. It conditions the maintenance of acid-base balance in muscle cells. Any changes in pH lead directly to a reduction in efficiency of muscle work. Please note that during times of increased training comes to the creation of anaerobic conditions, which in turn translates into the formation of lactic acid having a huge impact on the acidity of the environment of muscle tissue.

A few words about the mysterious Carnosine:

– Is made, inter alia, beta-alanine, which regularly as a supplement allows a considerable increase in the stocks of muscle tissue. From a physiological point of view, the task of carnosine is a caching environment muscles to keep it as a constant acid-base balance.

– Conducted so far a lot of research to verify the effect of beta-alanine on health and improve athletic performance achieved by, among others sprinters. Of course, they utilize an attempt to “blind” so-called. “placebo”. The results in improved performance time unequivocally demonstrate that the desired effect of beta-alanine. Conducted studies lasted up to 20 weeks, and there were no negative effects on the health of athletes. Currently, it is one of the most studied substances used in sports supplementation. Beta-Alanine – “SOLO” OR AS AN ADDITION TO CREATINES

Beta-alanine can be successfully used regardless of creatine, this will improve the efficiency of muscle tissue, especially when the training intensive and heavy. But unquestionably combination with creatine is the ideal choice to help a significant improvement achieved during the cycle of growth of muscle tissue. It is hard to imagine a better (more efficient) than the combination of beta-alanine and creatine. It should be emphasized that the beta-alanine is not working as creatine – their effectiveness is to complement its activity. In other words, it allows to conduct longer and more intense workouts.

Keep in mind that increasing the daily dose is important, however, to a point. It is assumed that 3 to 4 grams per day (preferably in two portions 2 grams) is the best choice. Further increasing its amount will not bring the expected benefits. As used daily doses did not differ depending on whether it is a training day or not.

Most athletes using the first beta-alanine meets with tingling occurs most often on the face, back and sometimes hands. This is a result of its actions, which disappears after a “few days of use” – which does not indicate at all that stopped working. The time needed to adjust to the body is very individual and each may be different (sometimes persists for a long time). These “pins” is usually 30 minutes from the intake portion of the beta-alanine.

Vitamins are involved in many processes occurring in the human body. The addition of vitamin B6 pyridoxine hydrochloride is highly desirable for these types of supplements. It is involved in blood formation, reduces the uncontrollable muscle spasms and most importantly for athletes involved in energy metabolism (metabolism of nutrients).

As you can see this is a very well thought-out supplement, which, despite its simplicity is characterized by very high efficiency!

* Any Bryl powder is not a fault and does not affect the operation of the product.

There are no reviews yet.

Be the first to know about our new arrivals andv exclusive offers.

WARNING! PLEASE ONLY PURCHASE AND USE THE PRODUCTS ON THIS WEBSITE IF YOU ARE AGED 18 YEARS AND OVER. PLEASE ENSURE YOU ARE IN A GOOD STATE OF HEALTH AND/OR CONSULT YOUR DOCTOR BEFORE STARTING A SUPPLEMENT OR EXERCISE PROGRAMME. 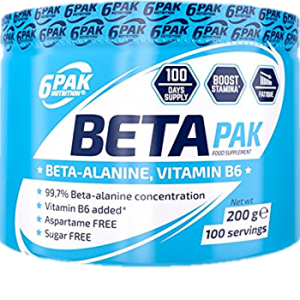 You're viewing: 6PAK Nutrition BETA PAK 200g £10.99
Add to basket
Sign in Create an Account
Lost your password?
Select the fields to be shown. Others will be hidden. Drag and drop to rearrange the order.
Compare
Wishlist 0
Open wishlist page Continue shopping
Shopping cart close